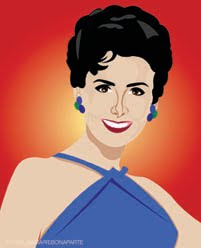 I first saw Lena Horne on Sesame Street. I thought she was so beautiful, I said, " Mummy, that lady is pretty." Later, I overheard my mom, and an aunt discussing how amazed they were to find out that she is black. Black? like me? How could she be black? I wanted to look at the same episode to see this beautiful 'Black' lady. Thanks to TTT (the first TV station in Trinidad and Tobago) reruns, I was able to see Lena again, this time I searched for any traces of black, and found none, I thought, maybe they made a mistake.

Later, with the advent of 'internet' and 'information'. I found Lena again, she became an activist, she still sang, and her smile was as radiant as my crispy white school shirts in the sun. Mrs. Horne's smile made my day. If I felt down and out, and bing and bang, I would remember her smile, or "googled" it, and somehow everything felt positive.

If you were to tell me, that she hated racism, and she called herself black, I would sputter on a glass of water. She could simply "pass" and call it a day, but like Moses, a Hebrew growing up in the house of a Pharaoh, Lena called herself black. I know some folks who are black, and for the life of me, they don't even come remotely close to Lena in looks, yet they call themselves white. Fascinating!

Did you know that at one point she grew frustrated with Hollywood? In Brian Lanker's Book, I dream a world: Portraits of Black Women Who Changed America, she said, : "I was always battling the system to try to get to be with my people. Finally, I wouldn't work for places that kept us out...it was a damn fight everywhere I was...all over the world." Turns out, Lena became seeming aloof, so that people would not get to close to her to hurt her feelings.

Well, I don't want to continue to saddle this post with the perils and frustrations of what Lena really had to go through, so I'll sum it up: She was never a Tragic Mulatto, nor did she let Hollywood keep her down, she learned to love herself, she smiled her dazzling smile, became an activist against racism, stayed classy and firm, kept her chin up, sang her songs with her magnificent voice, and lived to a very ripe age. And you know what? As she grew older, she just got better, like fine wine.