Sophia Turpin and I

There is just some people I can never forget. I remember strange things about people. I remember how their toes look, how yellow their teeth are, how long their fingers, and sometimes, if they have no neck. I remember Sophie's smile.

I met Sophie, just because she smiled at me, and soon after we became fast friends. I renamed her Turpentine, after a very sweet, local mango. When I called her that, I remembered her sweet disposition, and a fearless mother. It was a unique friendship, in that she had three children, and I had none. She had a very difficult life, and my life, although emotionally trying, could not match up to the courage that she showed in the face of a truly unfair life.

Before I left for NYC, we did some things together, I would visit her, and her kids, and one night I took them for Coconut water, later when her kids were by their father, she came and spent a night by me. We spoke until the wee hours of the morning, then she had to go to work. I had just returned from NYC, when I heard that her kidneys were failing her. Prior to that, I was looking into organ donations. I had two kidneys, and so far they were fine, perhaps she would like one, I thought. So, I asked, someone who knew her very well, and they said, not likely, since she could still die. I also thought of the red tape corruption that engulfs this country of ours, and it was not going to be a simple issue of me taking one of my kidneys and letting the doctors, give it to her. I did not want to die in the process, but I did not want my sweet Turpentine to leave her kids without a mother, and me without a friend. So, I planned to visit her, which I did, I met her brother and he stated that she was living with a sister and her family along with her two daughters. So I took comfort in this. Meanwhile, I was going through some rough patches of my own.

Soon I met Turpentine, a few months ago and I was tearful that she looked ok, but her smile, still bright and genuine enveloped me once more, and we spoke like old buddies, my tears flowing and she comforting me. About three weeks ago we met again, and she showed me the healed wounds from the dialysis, machine hook ups. She stated with a slight frustration, "They run out of places to cut me." We hugged and hugged, she was shorter than I was and very, very small. I was scared, and I did not want to think about it.

Today, she passed on, in the hospital, under pressure from doctors to take a blood transfusion. Khadine and Khadisha, and Khareem has no mother, and I fear that their lives are about to get very complicated. With no mother and an absentee father, I can do nothing but hope, and possibly assist in some way. I don't like funerals, but I will go, just because of Sophie's Smile.
Posted by LMB at 8:48 PM 2 comments:

Lately, I have noticed that I forgot my sordid history, and I did the same thing that got me into trouble before. I was very disappointed in myself, and I am now more determined to learn from past mistakes.

On a more serious note, something strange happened today. I met someone who is quite familiar with my family. He asked me my name and I simply mentioned my name and nothing else, he pushed for my surname, and I declined to tell him. I felt as though my surname has become a curse. And, personally, I no longer felt proud of it. Despite the Napoleonic history, in Europe, I thought that that history is outdated and not applicable to my personality, or life. I am simply me, and I am not my name. However, my surname as popular as it may be, as beautiful, and powerful, given in any which way you think, or thought about it, has dampened my spirit and my drive to succeed. Although, I must say, that if you want to be famous, you can mention, something controversial, or do something stupid, and you can become famous and people will just throw money your way, or you can ghost write your 'story'. While you, the lonely cheese, cower in bed thinking of some offended person pelting a molotov cocktail at your home. Or not.

At one of my jobs, word through the grape vine was that I did not listen, and I counteracted it with, "well why did he not tell me this to my face, why wait, and lie to me, thinking that he is so smart to insinuate, that I, defied his every word like a swash-buckling pirate, using my rapier to slice and dice his words so that I can, 'destroy his decisions'". Had he laid his basketballs on the table, and tell me what he really thought, I would have opened my ears to what he said. Instead, he threw limestone and talcum pebble accusations, 'hoping' that I would run from the 'meeting', bawling as I did so, and admitted that he was 'surprised' that I stayed, and endured, his 'soft-spoken, invalid diatribe', only to say to another person, after and later, via the Trinidad Pumpkin Vine Association, that I did not listen. Did I? Or did you? When you are on a high pedestal, make sure it is solid and impenetrable, and chain-saw resistant. Some folks believe that heir horse is so high, it can leap over tall buildings and swim in the strongest seas, but then that is what, Hitler thought, and his 1,000 year Reich rule did not make 10 years, you do the math.

So back to my namesake, and my short pin complex, that gets people so vex. When, you don't communicate your issues, it gets lost in a jumble of buttons, everyone would choose their favorite colour, and forget what you said. So it is elementary that I am a graphic designer, with original ideas, and a passion for design, and a very colourful (british spelling), speech of humorific proportions, and I tend to place colour and personality in everything. Apparently, I am deaf, and I do not listen to people, I also wear a hearing aid, and I can see the good in all folks...and will in a moments notice, spend two cents to throw rice at birds.

Butterflies named Elementary and Apparently, fly away, and come home safely.
Posted by LMB at 10:25 PM No comments: 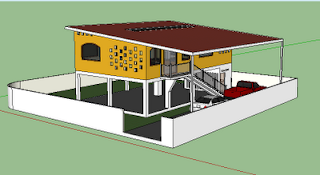 A very simple home that is cosy and comfortable and has made good use of the yard. It has 4Bedrooms, 1.5 baths, and a sizable kitchen. The washroom is downstairs, giving the living area more space. There is also a backdoor with stairs in case of emergency. If you want to see more pics, stay posted! Of course it would be lovely to get contributions as well.
Posted by LMB at 2:01 PM No comments: 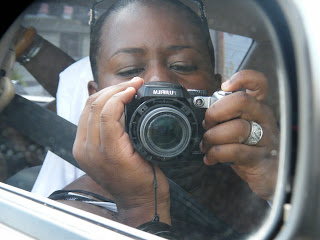 I have been thrown curve balls for a while. Getting small jobs here and there, going to job interviews, and the like. I have met and made new friends and accomplices. Got some recent health issues and went to Tobago, which is where the above pic was taken. Some friends got married, and one more is getting married this week, I wish her all the best. Our Peugeot finally got sold and I got another 2nd hand vehicle, so life has had its ups and downs.

Studying again, more on that later, as a result I have gained a new level of self esteem. Recently, I just completed some new homes on Sketchup, and I did a new portfolio, with my home designs in it. I was so proud of myself. I intend to return here with some new recipes, and ideas for craft, seeing that I am getting more time, furthermore I have been working on a new website design, its still in the plans, so I have been very busy.

So stay tuned, I have got a ton of new stuff to display this week!
Posted by LMB at 4:44 AM No comments: