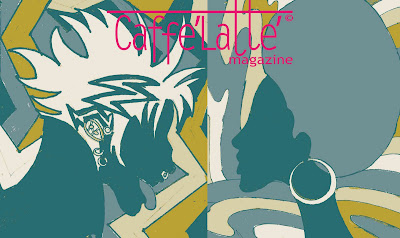 For a while I held off discussing race on CafféLatté Magazine, because I did not want to be controversial and add fire to the flames of hate. So bear with me and and chill. Here we go:

When I first got the idea for CafféLatté Magazine I was in college. Our project was to design a magazine layout on any subject, I believe it was our 2nd term, and it was one of the most projects oriented term at Katharine Gibbs School. I offered the idea to my professor and she was not too impressed, and I did not understand then, as I do now. Even though there are many interracial couples and mixed people in NYC, using a magazine to target them could cause some serious trouble. However, I was disappointed, but my mom grew us up to believe that if we don't stand for something, we cannot stand at all. And so I defended my right to design the magazine. On a conditional watery approval, I excitedly computerized my ideas. In a nutshell I got a good grade. Which is not so bad, but my layout was a bit off, and the heading font design had some issues, because even my mom had some problems with it.

For that sample mag I interviewed my first couple, they met at a factory, she was from Italy, and he was from North/South Carolina, they had three grown children, and they were only too happy to share their story. To this day they are still married and in love, and I think their last daughter just got married.

I was not always too open on the prospect of race mixing. I believed in pure race and anything that smacks of any other race, I could not be bothered. But inside of me, in my inner sanctum, there were questions, and blah answers to go with them. So, I sat and read and looked at movies. There was nothing that I held myself back from, except the book, Mein Kampf by Adolf Hitler, which I think was basically a do not go there decision. All I had to do was read up on Germany's history during the period of WWII, plus countless of books, and tapes and articles on the Holocaust, The Pianist (personally, this is on of my favourite movies) and the Tattoo-skin lamp, and the Concentration camps and Anne Frank's Diary. I also looked at movies like Rosewood, and Roots, the movie and the book by Alex Hayley. I looked up KKK sites and felt repulsed, but because of free speech I remained with an open mind to hear what they had to say. I looked at the Black Panthers and what they wanted America to understand, and I read up on the Tuskegee Airmen. Basically I decided to educate myself, so that when I made a decision, it was not by hearsay or "theysay", it became I think and I understand.

In my last term, my Sociology Professor, said many things and warmed my heart. She began the term by stating her race, and she spoke about her DNA make up. She was one of the curious few who decided to do DNA testing to trace her ancestry. And one of the things she encouraged us to do, is to take that test, which I plan to do. She encouraged us to think about the world around us, and migration, and poverty, and what makes a freak, we also did a brief segment on American History X. If you are interested I will search to see if I have her name. She was lovely, and I profoundly remembered how she made Sociology very socially appealing.

Which brings me to my longtime guilty pleasure, the book, Stuff White People Like

. I am a frequent visitor to the website and the stuff is hilarious. I look at it purely out of entertainment purposes. I don't take it too seriously, but author has made some pretty interesting observations. I have not read the book, but with some more guts, I will take a look in due time.