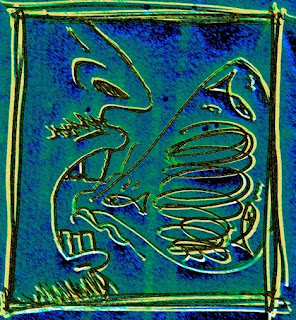 The F-Bomb and the Receiver of it

It is not uncommon to hear the F-Bomb these days. Television, movies, your boss, your uncle, people on the street, music, three-year olds (the proof is in Youtube), and even your mom say it. So, technically it is safe to say it is a common adjective. Although it is a very rotten one.

The F-Bomb, is used to make you feel the force of what a person is saying. And that I don't really have to explain, I will try to explain, only if you were born in another galaxy, and that galaxy has never ever been occupied or heard of by humans.

I have been a guilty user of that word once, and I tell you from personal experience, it is the most uncreative, stupid, and inflated-ego word. It gives you a sense of false pride, and on saying it, you say to yourself, "That'll show them." Until the other person returns the same F-Bomb sentiment. Only then you realize, you have been checkmated with a fellow pawn on a dirty linguistic chessboard game.

People seem to delight when legends use the word. If someone 'famous' says it, it takes on a sacred monument glow. If a homeless person uses it, it looks and smells like three day-old unfrozen fish. If a boss uses it, he is feared, but his respect loses value, like a two-week old dead rotten elephant. If Barbie use it...mothers would protest. I wonder, does the F-Bomb hold any significance today, than it would have done in the 1960's? The similarity is, that it still remains a very offensive word, the difference is, that today in the 21st century, you can market a perfume with that word on it, and it would sell, inoffensively.

When receiver of the F-Bomb internalizes the word, it shocks them, particularly when it is not in their personal vocabulary. There is a feeling of shock, headache, heart palpitations, and all round stress. It is even worse when someone who is supposed to love you, say it to you, like your husband, wife, siblings and parents, and worst of all your children.

The Rotten-Fish word is offensive, vulgar, uncreative, unimaginative and common. It does not help your situation in anyway (especially on job interviews). Lately, I have noticed a growing number of people who are opposed to the constant use of these types of words, and look forward to the day, that clean English language (or any language for that matter) could be the highest form of speaking.

Me, I have been very successful avoiding the use of that word since that black day. And yes, I have gotten very angry and stressed, and in intense situations, I walk away, count to ten, and move on. I am sure most of you have witnessed two people cussing, it is most embarrassing, and lack of good manners.
Posted by LMB at 12:31 PM